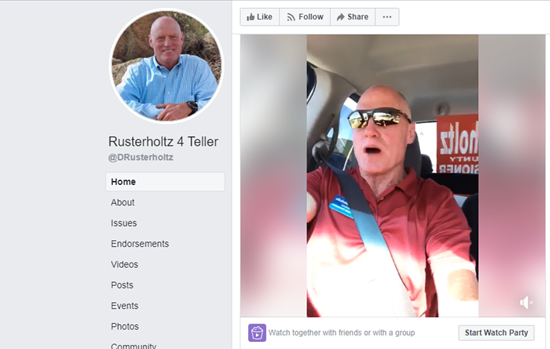 Hello, I’m here in Woodland Park waiting at a red light.  I was just thinking.

Ya know, one of the core things in Republican values is to work hard, and that Republicans work.  And besides that, if Republicans didn’t work, who would support all of these crazy Democrat ideas that are out there?

So anyway, I just found out that I was accused of not showing up at meetings here in the county.

Well, you know as being a Republican, believing in hard work ethics, don’t you think it would be a great idea if we had our county meetings, at least some of them, at a time, when working people who support our country, who are the backbone of our nation, and entrepreneurs could show up to be at public meetings.  I don’t know, maybe it’s crazy but it sounds reasonable to me.

But we need to consider start scheduling our meetings, commissioner meetings, at least some of them, important ones, like budget meetings in the evening so we can actually get our constituents…

Oh by the way, they’re not constituents, our bosses, the people who hired elected officials…

So that we can be there and participate in the meetings?

I don’t know about you, but I have a certain number of days I can take off each year and otherwise I’m not responsible to my job.

Should we be scheduling county commissioner meetings, at least some of them, at a time when the elected officials’ bosses, the citizens, the inhabitants of Teller County can be there?

Maybe it’s crazy, let me know, I’d like to hear from you.

But when I become a commissioner, I’ll tell you what.  I wanna work towards that transparency and availability.  What an odd conception.

Anyway, thanks a lot.  Talk to you later.  Bye.

A Message from Dan Williams